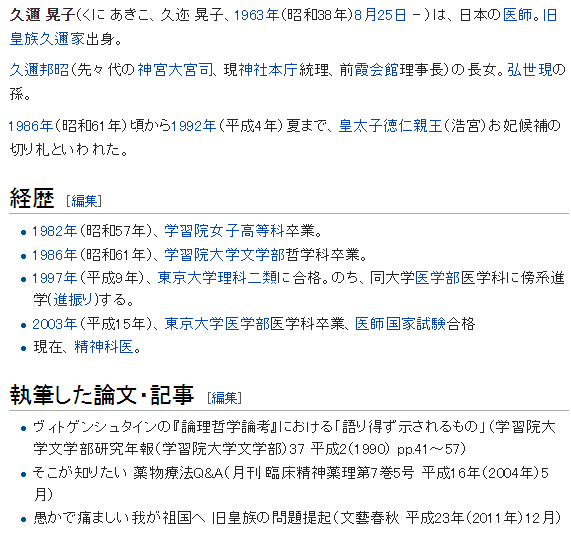 Line of succession to the former Ethiopian throne 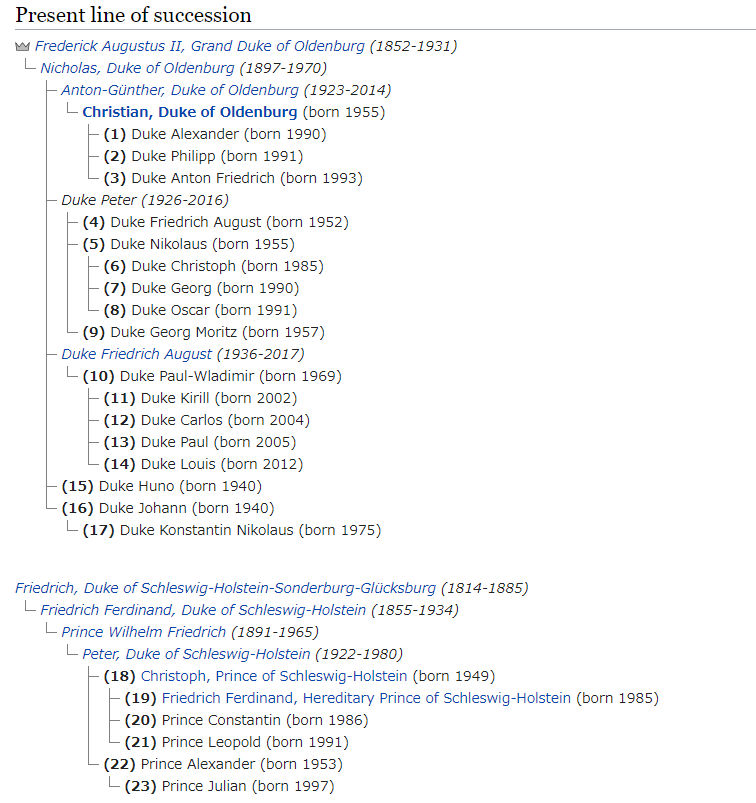 Kubrat, Prince of Panagyurishte, Duke in Saxony[1] (born 5 November 1965), known by his civilian name as Kubrat de Sajonia-Coburgo-Gotha y Gómez-Acebo (in Spain) or Kubrat Sakskoburggotski (in Bulgaria), is a Spanish surgeon and member of the former Bulgarian Royal Family. He is the third son of the exiled Tsar Simeon II of Bulgaria and his wife Doña Margarita Gómez-Acebo y Cejuela.

After completing his primary and secondary education at the Lycée Français in Madrid, Kubrat studied between 1984 and 1990 at the University of Navarra in Pamplona, where he obtained a Licentiate in Medicine and Surgery. After his graduation, he worked for five years as a resident physician at Puerta de Hierro Clinic in Madrid, where he made his expertise as a general surgeon. Subsequently he worked for a year at the St Mark’s Hospital and Northwick Park Hospital and further specialized as a surgeon in proctology. Kubrat worked between 1997 and 2003 as a colorectal surgeon at the Ruber International Clinic in Madrid and was in charge of the Ambulatory Surgery Unit. Since September 2003, he became Head of the Colorectal Unit at the San Camillo Hospital in Madrid, where he also acts as Director of the Team Care Management since June 2006. He was director of Shared Medical Systems between 1999 and 2000, and is currently also part of the advisory board of Tokuda Hospital (Sofia, Bulgaria) and a Consultant for Mensor Health Care, S.L in Madrid.[2]

He is the godfather of Pablo Nicolás Urdangarín y de Borbón, who is the son of the Infanta Cristina and Iñaki Urdangarin.

Kubrat is shortly styled as HRH The Prince of Panagyurishte.

The Brazilian monarchy came to an end on November 15, 1889, following a military coup which overthrew Emperor Dom Pedro II and established a republic. According to the Imperial Constitution (1824), the Brazilian monarchy was hereditary according to male-preference primogeniture among the dynastic descendants of Emperor Pedro I of Brazil, and the crown could only be inherited by one who held Brazilian nationality.[1] The Imperial constitution also states that the monarch and the first in line should be Catholic,[2][3] and the marriage of a female heir presumptive required consent of the emperor or the Assembly.[4]

Claimants to headship of the post-monarchic Brazilian imperial legacy descend from Emperor Pedro II, including the senior agnates of two branches of the House of Orléans-Braganza; the so-called Petrópolis and Vassouras lines.[5] Prince Pedro Carlos of Orléans-Braganza (born 1945) heads the Petrópolis line, while the Vassouras branch is led by his second cousin, Prince Luiz of Orléans-Braganza.[1] Rivalry within the family erupted in 1946 when Dom Pedro Gastão (1913–2007) repudiated the renunciation to the throne of his late father, Pedro de Alcântara, Prince of Grão-Pará (1875–1940), for himself and his future descendants, when he made a non-dynastic marriage in 1908.[1] Pedro de Alcântara was the eldest son of the Princess Imperial Isabel (1846–1921) who, as Pedro II’s elder daughter and heir presumptive when he was dethroned, became the last undisputed head of the family after her father’s death in exile in 1891.[1] Pedro Carlos is Dom Pedro Gastão’s eldest son. Dom Luiz descends from Isabel’s younger son, Prince Luís (1878–1920) who, by a Bourbon princess, fathered Prince Pedro Henrique (1909–1981). Dom Luiz is Pedro Henrique’s son by a Bavarian princess and upholds his dynastic claim to the same legacy.

In 1908, Dom Pedro de Alcântara wanted to marry Countess Elisabeth Dobržensky de Dobrženicz (1875–1951) who, although a noblewoman of the kingdom of Bohemia, did not belong to a royal or reigning dynasty. Although the constitution of the Brazilian Empire did not require dynasts to marry equally,[6] it made the marriage of the heir to the throne dependent upon the sovereign’s consent. Princess Isabel, then head of the Brazilian Imperial Family, considered that Brazilian dynasts should adhere to European marital tradition, within which royalty married royalty. Prince Dom Pedro wanted to marry with his mother’s blessing, and so it was agreed that she would consent to the marriage on condition that he resigned his position in the line of succession. As a result, Dom Pedro de Alcantara renounced his rights to the throne of Brazil on 30 October 1908.[7][8][9][10][11][12][13] To solemnize this, Dom Pedro, aged thirty-three, signed the document translated here:

I, Prince Pedro de Alcântara Luiz Filipe Maria Gastão Miguel Gabriel Rafael Gonzaga of Orleans-Braganza, having maturely reflected, have resolved to renounce the right that, by the Constitution of the Empire of Brazil, promulgated on 25 March 1824, accords to me the Crown of that nation. I declare, therefore, that by my free and spontaneous will I hereby renounce, in my own name, as well as for any and all of my descendants, to all and any rights that the aforesaid Constitution confers upon us to the Brazilian Crown and Throne, which shall pass to the lines which follow mine, conforming to the order of succession as established by article 117. Before God I promise, for myself and my descendants, to hold to the present declaration. Cannes 30 October 1908 signed: Pedro de Alcântara of Orleans-Braganza[14]

This renunciation was followed by a letter from Isabel to royalists in Brazil:

Most Excellent Gentlemen Members of the Monarchist Directory,

With all my heart I thank you for the congratulations upon the marriages of my dear children Pedro and Luiz. Luiz took place in Cannes on the 4th with the brilliance that is desired for so solemn an act in the life of my successor to the Throne of Brazil. I was very pleased. Pedro´s shall take place next on the 14th. Before the marriage of Luis he signed his resignation to the crown of Brazil, and here I send it to you, while keeping here an identical copy. I believe that this news must be published as soon as possible (you gentlemen shall do it in the way that you judge to be most satisfactory) in order to prevent the formation of parties that would be a great evil for our country. Pedro will continue to love his homeland, and will give all possible support to his brother. Thank God they are very united. Luis will engage actively in everything with respect to the monarchy and any good for our land. However, without giving up my rights I want that he be up to date on everything so that he may prepare himself for the position which with all my heart I desire that one day he will hold. You may write to him as many times as you may want to so that he shall be informed of everything. My strength is not the same as it once was, but my heart is still the same to love my homeland and all those who are so dedicated to us. I give you all my friendship and confidence,

If the 1908 renunciation of Pedro de Alcântara was valid, his brother Luiz (and eventually, Pedro Henrique) became next in the line of succession after their mother.[8][9][10][11][12][13] Isabel’s headship of the Brazilian Imperial House lasted until her death in 1921, when she is widely considered to have been succeeded by her grandson, Prince Pedro Henrique of Orléans-Braganza.[8][9][10][11][12][13] Pedro Henrique was the elder son of Prince Luiz, second child of Isabel and a veteran of World War I who had died in 1920 from an illness he contracted in the trenches.[15]

Prince Pedro de Alcântara did not dispute the validity of the renunciation.[16] Though he did not claim the headship of the Imperial House himself in 1937, he did say in an interview that his renunciation “did not meet the requirements of Brazilian Law, there was no prior consultation with the nation, there was none of the necessary protocol that is required for acts of this nature and, furthermore, it was not a hereditary renunciation.”[17]

The dynastic dispute over the Brazilian crown began after 1940 when Prince Pedro Gastão of Orléans-Braganza, eldest son of Pedro de Alcântara repudiated his father’s renunciation and claimed the headship of the Brazilian Imperial House.[18]

After the death of Pedro Gastão in 2007, his eldest son Prince Pedro Carlos and younger children declared themselves republicans.[19] Several of Pedro Gastão’s grandchildren also have dual citizenship.[20]

During the thirty years between abolition of the Brazilian monarchy in 1889 and repeal of the law of banishment against members of the former Imperial family in 1920, all of the dynastic descendants of Pedro II, including the ancestors of the so-called Vassouras and Petropolis rival branches of the family, lived in exile,[1] despite occasional efforts of some of the House of Orléans-Braganza to visit the country.

The descendants of the marriage of Emperor Pedro’s younger daughter, Princess Leopoldina of Brazil (1847–1871), with Prince Ludwig August of Saxe-Coburg and Gotha ((1845–1907), also took up residence in Europe: Prince August Leopold of Saxe-Coburg and Gotha (1867–1922) became a career officer in Austria’s navy, marrying Archduchess Karoline Marie of Austria in Vienna in 1894.[1] Their daughter, Princess Teresa Cristina of Saxe-Coburg and Gotha (1902–1990), although born in Austria, became the first of Leopoldina’s descendants to repatriate to Brazil,[1] moving there in 1938 with Baron Lamoral Taxis von Bordogna und Valnigra (1900–1966), a Tyrolean courtier whom she had wed in Salzburg in 1930.[1] On 18 October 1950, their four children, all born in Europe, were retroactively recognized as Brazilian citizens since birth,[1] and on 25 October 1951 the Rio de Janeiro court of justice rendered decision No. 13.036 changing their surname to “Tasso de Saxe-Coburgo e Bragança”.[1][21]

The Saxe-Coburg-Braganza branch is descended from Princess Leopoldina of Brazil, second daughter of D. Pedro II, and her husband, Prince Ludwig August of Saxe-Coburg and Gotha. Due to several years of difficulties that the Princess Imperial Isabel experienced in producing an heir to the Brazilian throne, clauses were included in the marriage contract between Leopoldina and her husband who ensured that the couple should, among other things, reside part of the year in Brazil and have their children in Brazilian territory, as heirs presumptive of Isabel: Pedro Augusto, Augusto Leopoldo, and José Fernando.[22] With the birth of D. Pedro de Alcântara, Prince of Grão-Pará and eldest son of Princess Isabel, the Saxe-Coburg-Braganza branch yielded first place in the line of succession to the Orleans-Braganza branch.

The only members of the Saxe-Coburg-Braganza branch who still retain Brazilian nationality, which was a constitutional requirement to succeed to the now defunct Brazilian throne, are the descendants of Princess Teresa Cristina of Saxe-Coburg and Gotha, daughter of Augusto Leopoldo.[23] The Brazilian nationality of princess of Saxe-Coburg and Gotha was recognized by the government of Brazil only in 1922. Their four children were registered in the consulate of Brazil in Vienna as Brazilian citizens.[23] Carlos Tasso de Saxe-Coburgo e Bragança, Baron Taxis-Bordogna-Valnigra and son of Princess Teresa Cristina, is the current head of this branch.

The succession line continues through other descendants of Princess Teresa Cristina of Saxe-Coburg and Gotha who still retain Brazilian nationality.[24][25] 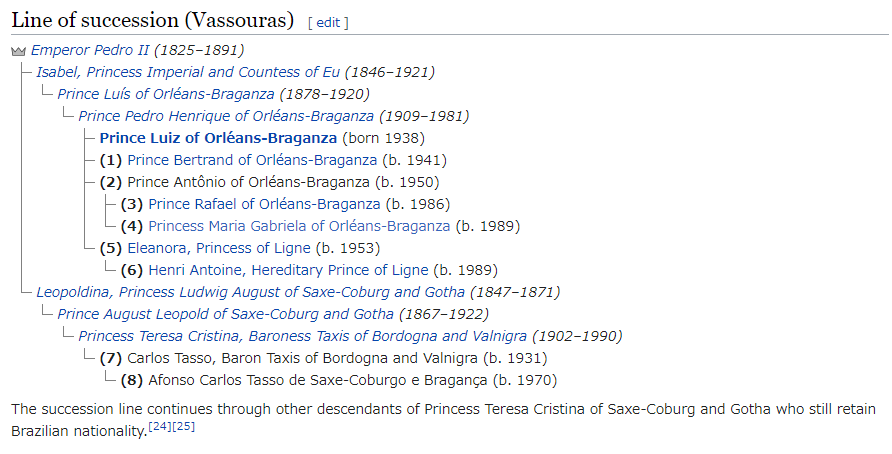 Line of succession in November 1889