The line of succession to the former Albanian throne is an ordered list of those eligible to succeed to the headship of the Royal House of Albania, grand mastership of the dynastic orders and ascend the throne of Albania in the event the monarchy is restored. The native monarchy of Albania was deposed in 1939. The current head of the royal house is Leka (II), Prince of the Albanians.

The first modern Albanian monarchy, the Principality of Albania was established on 21 February 1914. The German prince William of Wied was selected by the Great Powers to rule the newly independent country.

Prince William left Albania on 3 September 1914 due to serious unrest in the country. Prince William never renounced his claim to the throne and was succeeded upon his death in 1945 by his only son Carol Victor, Hereditary Prince of Albania. With the childless death of the Hereditary Prince in 1973 the Wied claim to the Albanian throne is unclear. 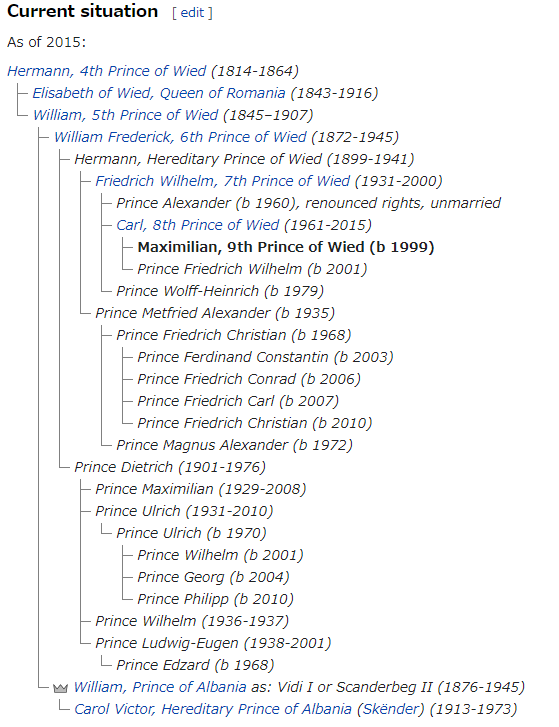 The second Albanian monarchy was established on 1 September 1928 when President Ahmet Zogu was proclaimed King of the Albanians. He reigned until 1939 when he was forced to flee the country following an invasion by Mussolini’s Italy.

With the death in exile of King Zog in 1961 he was succeeded as claimant to the throne and head of the House of Zogu by his only son Leka, Crown Prince of Albania, who was proclaimed King of the Albanians by the Albanian National Assembly in exile.[1] King Leka remained head of the house and claimant to the throne until his death in 2011 when he was succeeded by his only son, Leka II.

The following articles of the Albanian kingdom’s constitution of 1928 set out the succession to the throne:[2]

Article 51. The Heir to the Throne shall be the King’s eldest son and the succession shall continue generation after generation in the direct male line.
Article 52. Should the Heir die or lose his rights to the Throne, his eldest son shall succeed. Should the Heir to the Throne die or lose his rights and leave no son, the succession shall pass to the brother coming after him.
Article 53. Should there be no Heir to the Throne under articles 51 and 52, the King shall select his successor from among the male members of his family, but the King’s selection shall be with the consent of Parliament. Should the King not use his prerogative, and the succession remain vacant, Parliament shall then select a male member of the King’s family as successor to the Throne. In case no heirs exist in the King’s family, or such as may exist are held incapable by a special parliamentary decision taken by a two-thirds majority of the members of the House, Parliament shall select a successor from the line of the King’s daughters or sisters, but such successor must be of Albanian origin. When there are no males in the families above mentioned, Parliament shall select a successor of Albanian origin. Should the Throne remain vacant, the Council of Ministers shall exercise the Royal powers until the question of the successor is settled.
Upon the establishment of the monarchy as King Zog had no son, in accordance with the constitution he appointed his nephew Tati Esad Murad Kryeziu as heir to the throne.[3] Prince Tati was displaced in 1939 by the birth of Leka, Crown Prince of Albania, the only son of King Zog.[1]

Crown Prince Leka II, the only living descendant of King Zog I and the head of the royal house as of 2012, has no sons. The current heir presumptive to Prince Leka is Skënder Zogu, his first-cousin once removed.[4] After him the following currently living male members of the Zogu family could also become heirs: