The Kingdom of Saxony was abolished in 1918 when King Frederick Augustus III of Saxony abdicated. The succession law until the abolition of the monarchy was semi-Salic primogeniture and required the successor to be born of an equal marriage, approved in advance by the head of the house.[1] Accordingly, the last undisputed male member of the family was Prince Albert of Saxony, who assumed the headship of the royal house and the title Margrave of Meissen upon the death of his brother the Margrave Maria Emanuel in July 2012. This was challenged, however, by his nephew Prince Alexander of Saxe-Gessaphe who also claimed the headship based on a 1997 agreement, and who is said to have reached an agreement with Albert just prior to the funeral of Maria Emanuel which recognised Alexander as the dynasty’s heir.[2] With the death of Albert in October 2012 the dispute continued with Prince Rüdiger of Saxony, the only agnatic great grandson of the last King of Saxony, claiming the headship.

The conflict over the headship stems from the fact that the last undisputed head of the house Maria Emanuel, Margrave of Meissen, and the other princes of his generation either had no children or, in the case of Prince Timo, had children (including Prince Rüdiger of Saxony) who were not recognised by Margrave Maria Emanuel as dynastic members of the Royal House of Saxony.[3][4] The first designated dynastic heir of Maria Emanuel was his and Albert’s nephew Prince Johannes of Saxe-Coburg and Gotha, only son of their youngest sister Princess Mathilde of Saxony by her marriage to Prince Johannes Heinrich of Saxe-Coburg and Gotha, dynast of a ducal branch of the House of Wettin senior patrilineally to the royal branch.[4]

In 2014 the Deutscher Adelsrechtsausschuss (basically a deciding body of the associations of the German nobility with regard to questions of historical nobility law) issued an expert opinion that the Albertine line of the House of Wettin became extinct with the death of Maria Emanuel, Margrave of Meissen in 2012. None of the remaining family members, who bear the legal surname “Prinz von Sachsen Herzog zu Sachsen”, are allowed to use the style His/Her Royal Highness. Because there is no longer a head of the royal house, no family member has the right to use the title Margrave of Meissen.[5][6]

Claim of Alexander, Margrave of Meissen

After the early death of Prince Johannes, the heirless Maria Emanuel then considered as potential heir another nephew, Alexander Afif, the eldest son of Princess Anna of Saxony and her husband Roberto Afif, despite the fact Alexander was only a female line Wettin descendant whose parents’ marriage had, at the time, been morganatic,[3] and were contrary to the house laws of the Saxon royal house and of the Saxon Kingdom’s constitution, both of which required equal marriage for descendants to inherit dynastic rights.[1][4][7]

On 14 May 1997 the Margrave of Meissen proposed his nephew Alexander Afif as heir and drew up a document that was signed by the other male and female members of the royal house (including previously non-dynastic spouses of princes) setting out that Alexander would succeed on his death. The document was signed by:

Until his adoption, Alexander had used the title Alexander, Prince of Saxe-Gessaphe since 1972,[10] based on his claim to patrilineal descent from a Maronite Christian family of historical emirs and sheikhs in Lebanon, the “Afif” (or Gessaphe) dynasty.[11][12][12] Some sources now attribute princely rank to this family,[11] while others have ascribed to it a lesser status.[4] Since Alexander had fathered three sons and a daughter by his 1987 marriage to Princess Gisela of Bavaria (b. 1964),[13] his selection as heir offered the likelihood of compliance with the dynasty’s traditional marital rules for another generation.

The 1997 agreement proved to be controversial and in the summer of 2002 three of the signatories, Princes Albert, Dedo and Gero (the latter consented via proxy but had not personally signed the document)[14] retracted their support for the agreement.[2][15] The following year Prince Albert wrote that it is through Prince Ruediger and his sons that the direct line of the Albertine branch of the House of Wettin will continue, and thus avoid becoming extinct.[16] Until his death, however, the Margrave, as head of the former dynasty, continued to regard his nephew and adopted son, Prince Alexander, as the contractual heir entitled to succeed.[17]

Immediately following the death of Maria Emanuel in July 2012, Prince Albert assumed the position of head of the Royal House of Saxony.[2] According to the Eurohistory Journal prior to the Margrave’s funeral Albert met with his nephew, Alexander and recognised him as Margrave of Meissen.[2][18] However this claim is contradicted by Albert himself in his final interview, given after the funeral, where he states that he needs recognition as Margrave of Meissen.[19] Prince Alexander, citing the 1997 agreement has also assumed the headship.[2][20] Albert, Margrave of Meissen died at a hospital in Munich on 6 October 2012 at the age of 77.

Prior to the requiem for Margrave Maria Emanuel, Ruediger, who had sought to be recognised by his uncle as a dynastic member of the House of Saxony but was refused, conducted a demonstration outside the cathedral with Saxon royalists in protest against the late Margrave Maria Emanuel’s decision to appoint Alexander as heir.[21] Following Albert’s death, Prince Ruediger declared himself as the head of the house.[22]

The line of succession within the Saxe-Gessaphe line is:

Claim of Rüdiger, Margrave of Meissen

The other claimant to the headship of the Royal House is Prince Rüdiger of Saxony, the only direct male line great grandson of the last king of Saxony. He was born into the cadet Moritzburg branch of the Royal House of Saxony, which was named after the palace where his grandfather and the founder of the branch Prince Ernst Heinrich of Saxony lived and where Ruediger and his family returned to after German reunification. Prince Ernst Heinrich had three sons the Princes Dedo (1922-2009), Timo (1923-1982) and Gero (1925-2003), however only Prince Timo married and had issue including an only son Prince Ruediger. Like the Afif-Saxony marriage, the marriage of Ruediger’s father to his mother Margrit Lucas was also morganatic.

If equality requirements are discarded as a direct male line descendant of the kings of Saxony the head of the Royal House is Prince Ruediger. The last surviving undisputed male dynast Prince Albert wrote in 2003 that it will be through Prince Ruediger and his sons that the direct line of the Albertine branch of the House of Wettin will continue, and thus avoid becoming extinct.[25] Prince Ruediger himself never accepted the 1997 agreement and when asked for his opinion on who the eventual successor to Maria Emanuel should be he replied that it should be himself.[26]

Following the death of Maria Emanuel in July 2012, Prince Ruediger recognised Prince Albert as the new Margrave of Meissen and head of the Royal House of Saxony. According to the family website prior to his death Albert determined Ruediger to be his successor and instituted a clear succession plan.[27] On this basis following Albert’s death Prince Ruediger assumed the headship of the house.[28]

The Moritzburg branch, in order of primogeniture, is:

Yet another potential successor to the former monarchy’s royal crown, due to the semi-Salic succession law used in Saxony, is Karl Friedrich, Prince of Hohenzollern. He is the eldest son and heir of Friedrich Wilhelm, Prince of Hohenzollern (1924–2010), who was the son of Princess Margaret of Saxony (1900–1962), the eldest aunt of Maria Emanuel, Margrave of Meissen. The succession would fall to Prince Karl Friedrich in case the marriage of Anna, the mother of the Saxe-Gessaphe claimant and elder sister of the margrave, is deemed non-dynastic despite the actions of the margrave and agnates to de-morganatize it.

His claim would also depend upon there having been no family pact (Erbverbrüderung) which allocated the kingdom to another dynasty upon extinction of the royal Wettins’ male line, since Saxony’s constitution explicitly recognized the validity of such pacts.[1][30] After Karl Friedrich, who had also been considered in the line of succession to the defunct throne of Romania, there is also a line of succession potentially applicable to the Saxon royal claim.

In the house laws of the Kingdom of Saxony, succession is restricted to the Albertinischer Linie, a term which referred exclusively to Wettin dynasts of the royal branch, male and female, eligible to inherit Saxony’s throne,[1] and may constitute exclusion of claims by Ernestine agnates of the other branch of the House of Wettin. Paragraph 6 of the Constitution of the Kingdom of Saxony, however, states: Die Krone ist erblich in dem Mannsstamme des Sächsischen Fürstenhauses nach dem Rechte der Erstgeburt und der agnatischen Linealfolge, vermöge Abstammung aus ebenbürtiger Ehe. (“The crown is hereditary in the male line of the Saxon princely house in accordance with the principle of primogeniture and agnatic lineal succession, by virtue of descent from equal marriage”). Since the “Sächsischen Fürstenhauser” included all dynastic members of the various branches of the House of Wettin which ruled the Ernestine duchies until 1918, any of these agnates fit this requirement and might, theoretically, claim the royal Saxon throne in accordance with primogeniture.[improper synthesis?] This rationale could make the titular Grand Duke of Saxony, Michael, Prince of Saxe-Weimar-Eisenach, the royal heir by primogeniture after extinction of the Albertine branch (which is the most junior line of the House of Wettin although it alone attained the rank of a kingdom within Germany).

One or more of the Ernestine Wettins may also have claims superior to descendants of both female and de-morganatized Albertine dynasts if an Erbverbrüderung had been signed between the Albertine and any of the Ernestine branches of the dynasty. There are a number of extant lines of the House of Wettin (Weimar, Meiningen and Coburg; and the most junior of them, Coburg, includes the sub-branches of Windsor, Coburg proper, Koháry, Bulgaria and Belgium) who ruled the various Ernestine duchies and other realms.

It should, again, be borne in mind that Saxony’s royal constitution required that any successor to the throne be born of an equal (ebenbürtig) marriage, therefore Wettins who may qualify as dynastic princes under other house laws, might not be eligible under royal Saxon law:

Ducal House of Saxe-Coburg and Gotha

Albert Edward, Prince of Wales (later Edward VII) in 1863, and Arthur, Duke of Connaught in 1899, both deferred their rights and those of their descendants to the ducal throne of Saxe-Coburg and Gotha, in favor of their nephew, Prince Charles Edward, Duke of Albany. These deferrals are not relevant to the royal Saxon succession, however British dynasts may have contracted marriages that would be considered morganatic by royal Saxon standards. If not, Prince Richard, Duke of Gloucester is the senior descendant in the British male line of the Dukes of Saxe-Coburg and Gotha.

Otherwise, in 1932 Hereditary Prince Johann Leopold (son of Duke Charles Edward) made a non-dynastic marriage whereupon, under the then house laws, his descendants lost any rights to the succession of the ducal throne. The present Head of the Ducal House of Saxe-Coburg and Gotha is Prince Andreas, the grandson of Charles Edward, last reigning Duke of Saxe-Coburg and Gotha. 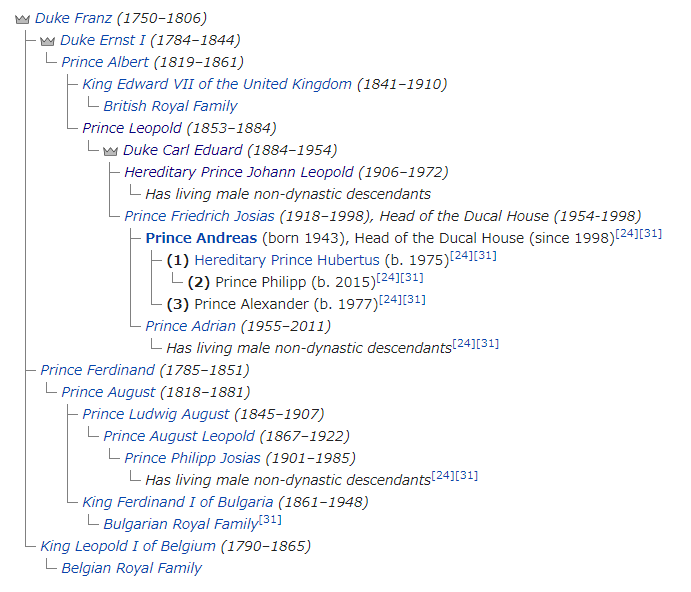 Lines of Succession in November 1918

Ducal House of Saxe-Coburg and Gotha