In Wikipedia, this article’s name is(was) Line of succession to the former throne of Anhalt.

The Duchy of Anhalt was abolished in 1918 during the German Revolution, following the defeat of the Central Powers in the First World War. The original succession principle was semi-salic, with the nearest female kinswoman of the last male inheriting the crown upon extinction of the dynasty in the male line.[1] The current pretender to the throne and head of the house is Eduard, Prince of Anhalt, son of Joachim Ernst, the last ruling Duke of Anhalt.[2]

Duke Eduard is the last surviving male member of the House of Ascania; after his death, the house will become extinct in the male line. The only other legitimate male line being the morganatic Counts of Westarp, descendants of Prince Franz of Anhalt-Bernburg-Schaumburg-Hoym and his wife Karoline Westarp. In 2010, Eduard abolished the semi-salic succession law in favour of absolute primogeniture, recognising his eldest daughter as his heir.[3] 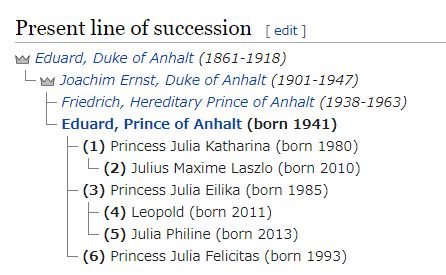