note:
As of July 2020.
That Wikipedia’s article has deleted by Wikipedians.

The dual monarchy of Austria-Hungary was abolished in 1919. The current Head of the House of Habsburg is Archduke Karl. The succession law used is Semi-Salic.

During the monarchy and for a number of decades afterwards members of the House of Habsburg-Lorraine had to be born of an Imperially approved, equal marriage to be deemed dynastic, according to the Imperial Family’s house law of 1839. On the authorization of the Emperor, that law was amended with addenda on 12 June 1900 (two weeks prior to a declaration to the Austrian and Hungarian legislatures of the morganatic nature of Archduke Franz Ferdinand’s impending marriage to Countess Sophie Chotek), requiring a spouse to belong to one of the following: the Imperial Family of Austria-Hungary, a currently or previously sovereign Christian dynasty, or a mediatised family. It further clarified the pool of eligible marital partners to include 1. a list of 32 mediatised, princely families, and 2. only members of the specified mediatized families who were born in compliance with their own family’s equality of birth house law or who could prove 16 noble, knightly quarterings (i.e., all great-great-grandparents) and beyond that at least 300 years of tournament, fief-holding nobility in the paternal and maternal lines.

By the time of the marriage of Archduke Karl in 1993 to Baroness Francesca Thyssen-Bornemisza, who did not meet the old equality requirements, the rules regarding equal marriages had been relaxed (In 1953 Archduke Rudolf’s marriage to Countess Xenia Tchernichev-Besobrasov and in 1976 that of another Archduke Rudolf to Baroness Marie-Hélène de Villenfagne de Vogelsangck had been approved as dynastic). Currently for a marriage to be dynastic all that is needed is the consent of the head of the house and a religious marriage. On 30 November 1990 the head of the house Crown Prince Otto recognized the title Count or Countess von Habsburg to the issue of morganatic marriages contracted after the dynasty ceased to reign. The descendants of archdukes whose wives had been of comital rank were retroactively integrated into the dynasty with traditional titles of Counts of Habsburg (e.g., the children and male-line descendants of Archduke Leo Karl {1893-1939} and his wife since 1922, Countess Maria-Klothilde von Thuillières von Montjoye-Vaufrey et de la Roche {1893-1978}), except those of Archduke Clemens Salvatore of Austria-Tuscany (1904-1974) who, on 2 April 1930, had renounced his Tuscan succession rights and dynastic titles, receiving authorization from Crown Prince Otto for himself, his wife and male-line descendants to bear the title and name of Prince or Princess von Altenburg on 15 December 1949.

Although under the semi-salic succession law, archduchess possess the right of succession when there are no males of any Habsburg-Lorraine branch left to succeed, during the monarchy (from 1719) upon marriage they renounced their succession rights to the Austro-Hungarian thrones in favor of the heiress of the last male (“Erbtochter” in German).

The Georgian royal family of the Bagrations practiced masculine primogeniture, legitimate sons and their descendants taking precedence over daughters and natural sons, and their descendants. Tamara the Great in 1184 was among the nation’s earliest ruling queens and Tamara II, 560 years later in 1744, became the last.[1]

In 2017, Ilia II, the Catholicos-Patriarch of Georgia, renewed a call for the restoration of a constitutional monarchy in Georgia.[2] This sentiment was echoed at the time by the ruling coalition party, The Georgian Dream.[2]

The claim to represent the royal legacy is asserted on behalf of both Prince Nugzar Bagration-Gruzinsky and Prince David Bagrationi of Moukrani, representatives of the Gruzinsky and Mukhransky branches of the Bagrationi dynasty, respectively. Prince David’s late father, Prince George Bagration-Mukhransky, was recognised by the Georgian government as head of the former royal house in 1991 and accorded the title of ‘Batonishvili’ (royal prince/tsarevich), as noted on his Georgian passport,[3][4][5] being the seniormost legitimate descendant of the dynasty in the male line.[1][6]

Other prominent Georgians, however, acknowledge the claim of Prince Nugzar, who springs from a junior branch of the Bagratids,[6] but is the seniormost descendant of the last Bagrationi to reign over the united Kingdom of Kartli-Kakheti,[7] which consisted of eastern Georgia (Iberia).[3]

Prince Nugzar’s direct ancestor, George XII, ruled Georgia’s united central and eastern realms, Kartli and Kakheti (the male-line of the westernmost and smallest realm, the Kingdom of Imereti, was dethroned in 1810 and became extinct in the legitimate male line in 1978). Although genealogically junior to the Mukhraneli dynasts, supporters of Prince Nugzar’s line (which has come under scrutiny due to omission of an authenticating witness on his father’s birth certificate)[8] uphold his claim as that of the most recent branch of the family to have reigned. Whereas the Mukhraneli fled the Russian revolution to western Europe and asserted their claim from abroad until the fall of the Soviet Union (whereupon the heir repatriated), unbeknownst to the West the main Gruzinzky line remained in Georgia under Russian domination,[5] explicitly advancing his claim in 2006,[9] after Georgia obtained official independence from the Soviet Union in 1991.[3]

The two branches were united in 2009 by the marriage of Princess Anna Bagration-Gruzinky (Prince Nugzar’s daughter) to Prince David Bagration-Mukhransky, who became the parents of Prince George Bagration-Bagrationi (born on September 27, 2011). George can claim to be the heir eventual to the abolished throne by reckoning descent from Georgia’s kings through either his father (heir-male of the House of Bagrationi) or his mother (heir-of-the-body of King George XII), thereby incarnating the shared claim that Ilia II encouraged and has recognised.[2]

Orders of succession of the two families

Line of the Royal House of Georgia (Bagrationi)

Line of the Royal House of Bagration-Gruzinsky 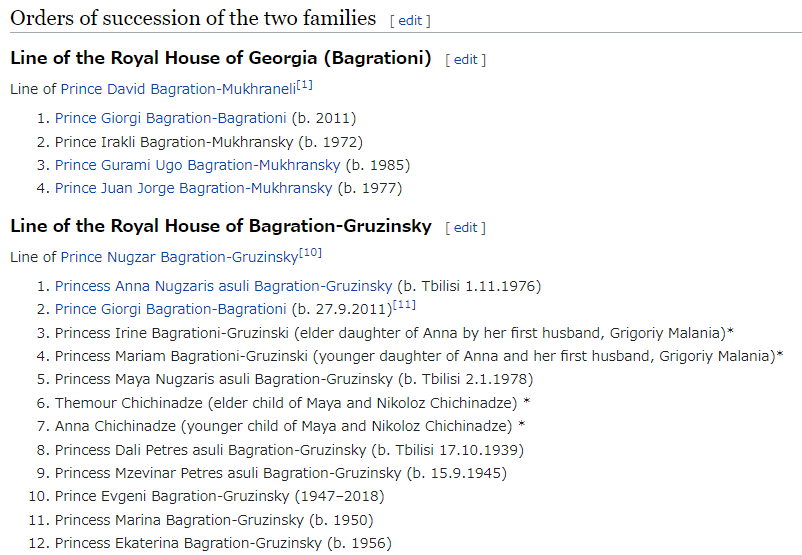 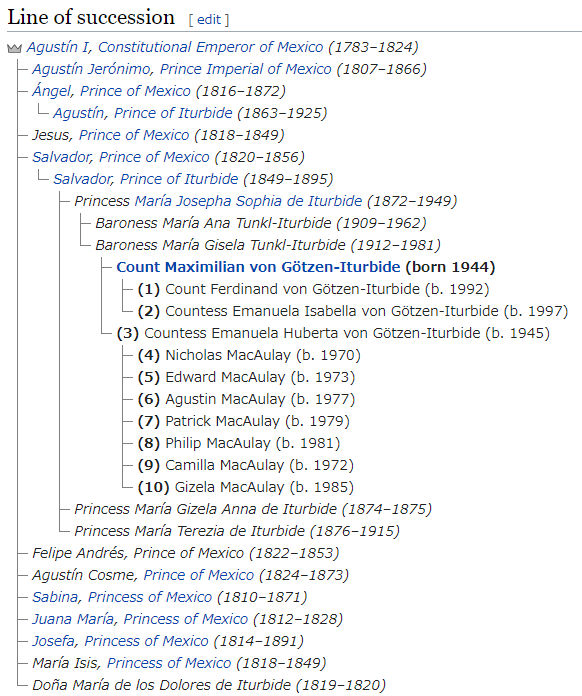 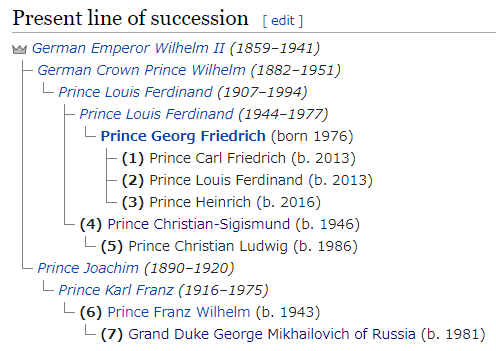 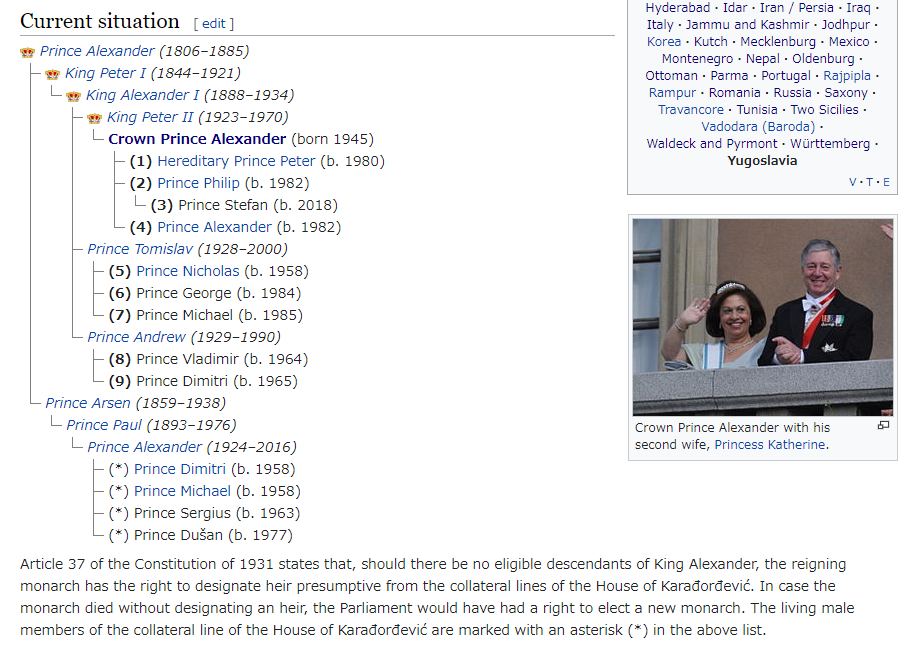